I’ve recently posted instructions on how to set up an Exchange 2016 DAG and set up of the mailbox database copies so this post will be dedicated to testing our DAG in various failure scenarios while also demonstrating some of the DAG troubleshooting methods.

To go to other parts in this series:


In order to make sure that our DAG is working correctly and to take a bit more of a look into what failures a DAG can tolerate without administrator input, we will test the following failures:

The key tools we will look at are below:


The lab follows on from what we set up earlier in part 1 and 2. Anyways, here’s a reminder - we have two Exchange 2016 servers running on Server 2012 R2 configured in an IP-less DAG: LITEX01 and LITEX02:

Our file share witness is on LITFS01, (file server) and our quorum model is node and file share majority, as is expected for a two node DAG:

In these tests, all client access services have been made highly available using DNS round robin. Instructions on how to set this up can be found here.

Ok, now we have confirmed that our DAG is in a healthy state before we go ahead and test it (break it?), we can begin with our first test.


To test this, I’ll force power off server LITEX01 which will be the same effect as having a power cut or other sudden total failure.


Outlook in online mode may become unresponsive and you may see the warning below.

After a few seconds, Outlook recovers and you can open your emails and continue working without issue. Whether you see this warning or not depends on how long it takes for your DAG to fail over and for the databases to be mounted again.


If the user was using OWA, they may be prompted with this error during failover but OWA then recovers without needing to log out and back in: 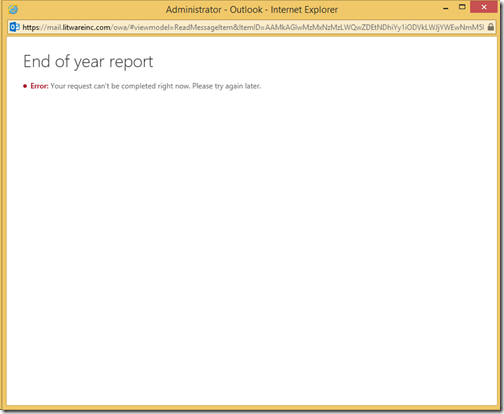 
Let’s take a look at what happened behind the scenes running these below commands from our surviving server, LITEX02. Our cluster failed over as we can see that LITEX01 is marked as down:

....and all databases failed over to LITEX02:


We can also check the cluster log which we can generate using the command to get the last 20mins of logs and output it to C:\temp\ClusterLog:


We can also take a look at the system event log on LITEX02 and we see event 1135 which states that LITEX01 was removed from the cluster:

“Cluster node 'litex01' was removed from the active failover cluster membership. The Cluster service on this node may have stopped. This could also be due to the node having lost communication with other active nodes in the failover cluster. Run the Validate a Configuration wizard to check your network configuration. If the condition persists, check for hardware or software errors related to the network adapters on this node. Also check for failures in any other network components to which the node is connected such as hubs, switches, or bridges” 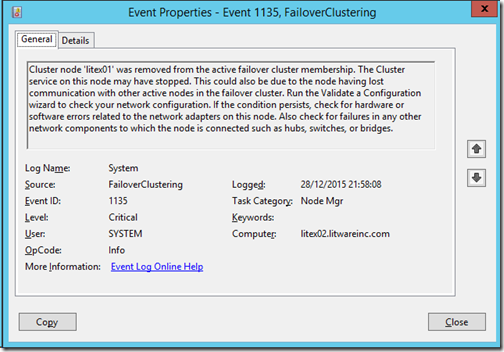 
Let’s move on an check the application event logs and just a few seconds later, we see event 2091 logged for each database that was mounted on LITEX02 stating that the attempts to copy the last logs failed and that the database will be mounted on LITEX02:

Database: MDB02\LITEX02
Mailbox Server: litex02.litwareinc.com
Database MDB02\LITEX02 will be mounted with the following loss information:
* The last log generated (known to the server) before the switchover or failover was: 750
* The last log successfully replicated to the passive copy was: 750
* AutoDatabaseMountDial is set to: GoodAvailability
Attempts to copy the last logs from the active database copy weren't successful. Error: The log copier was unable to communicate with server 'litex01.litwareinc.com'. The copy of database 'MDB02\LITEX02' is in a disconnected state. The communication error was: A timeout occurred while communicating with server 'litex01.litwareinc.com'. Error: "A connection could not be completed within 5 seconds." The copier will automatically retry after a short delay. 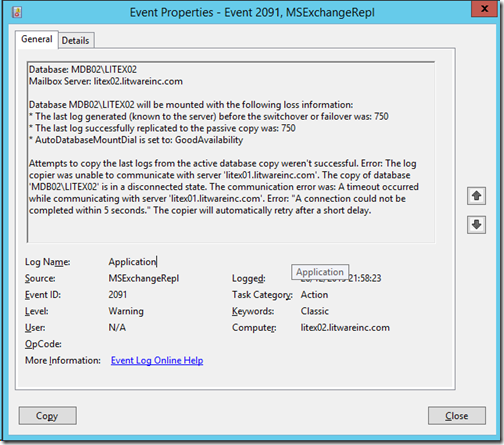 We also see event 2113 for each database where Exhcange attempts re-delivery of the emails from the transport dumpster: 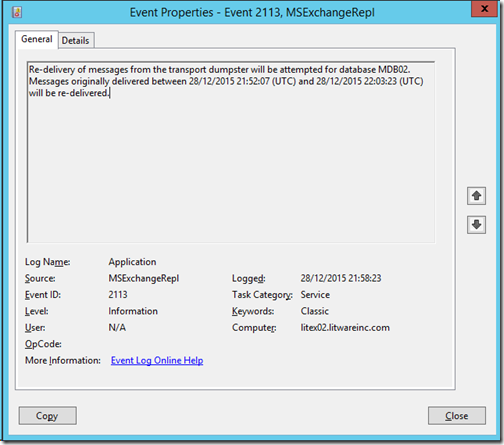 Eventually event 3169 is logged for each mailbox database to inform the administrator that the database has now been successfully moved to LITEX02: 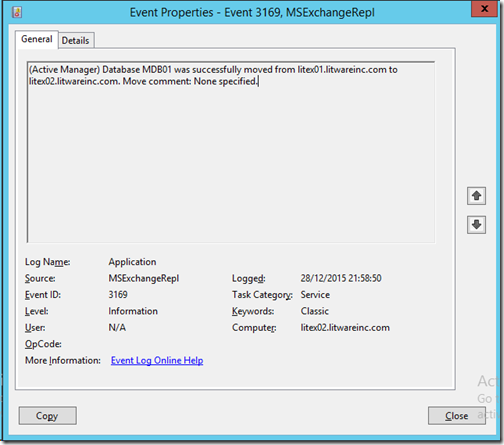 Event 40018 is also logged by the information store to let us know that each database was mounted successfully: 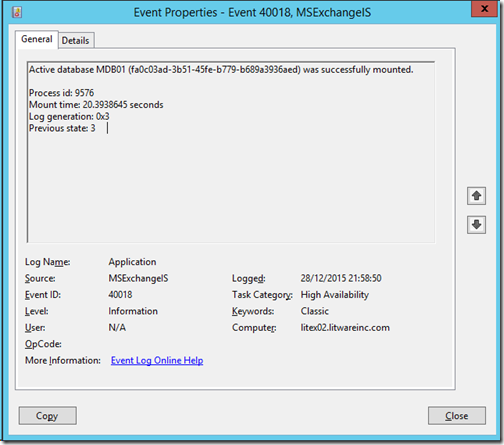 
The next log we should check is the Crimson channel event logs. This provides the same events as we see in the application log but also more information. You can access the Crimson Channel Event Logs by opening up Event Viewer, clicking on Application and Services Logs > Exchange > HighAvailability.

For example, here is one of the earlier events where attempts to LITEX01 time out after 5 seconds:

A client-side attempt to connect to litex01.litwareinc.com using '10.2.0.21:64327' from '<Null>' failed: Microsoft.Exchange.Cluster.Replay.NetworkTimeoutException: A timeout occurred while communicating with server 'litex01.litwareinc.com'. Error: "A connection could not be completed within 5 seconds."
at Microsoft.Exchange.Cluster.Replay.TcpClientChannel.TryOpenChannel(NetworkPath netPath, Int32 timeoutInMs, TcpClientChannel& channel, NetworkTransportException& networkEx) 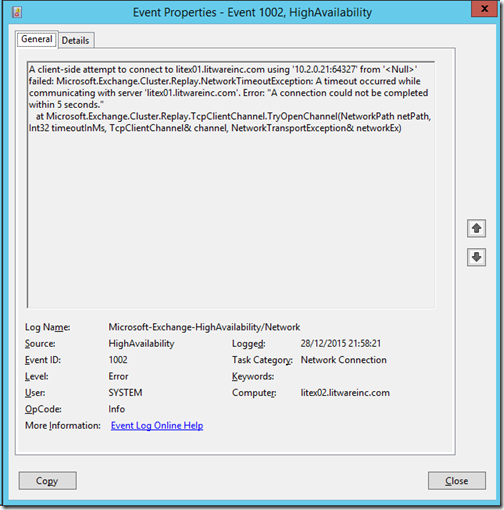 
The CollectOverMetrics.ps1 script which you can find in the Exchange Scripts directory is also quite useful. It allows us to output an HTML file with the failovers during a specified time. See below for how to generate all events since 28th December 2015 21:55, just a few minutes before the failover: 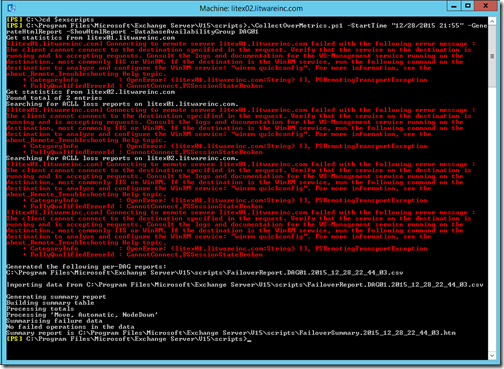 The reported errors are because LITEX01 is still offline and the script is attempting to collect data from it. Part of the HTML report is below where we can see that there was a failover due to a node being down. 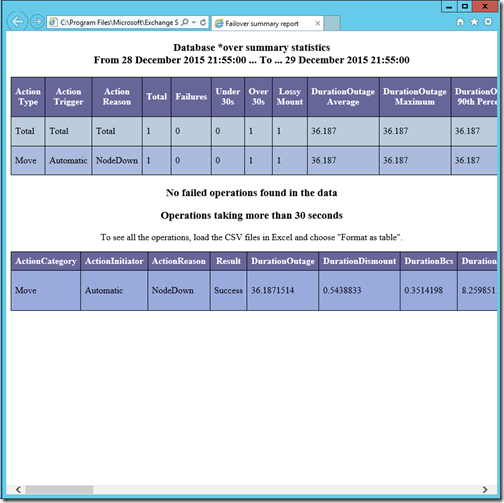 I’ll now power LITEX01 back on, check the services are running and then redistribute the databases using the .\RedistributeActiveDatabases.ps1 script. You can find out more information about this script here.


That concludes the DAG member failover test and hopefully you can see a number logs and scripts that you can use to find out what is happening in your IP-less DAG setup.
In the next part, we’ll continue our DAG testing with a simulated REPLICATION network failure. See here for part 2.
Posted by Mark Gossa at 01:00